FAQ – The difference between electric and acoustic guitars

What’s the difference between acoustic and electric guitars? 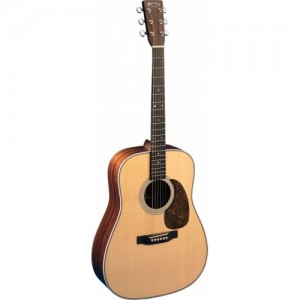 Acoustic guitars are hollow timber boxes with a sound-hole cut into them and are designed to resonate in order to make their own sound. Electric guitars are slabs of solid timber and produce very little volume when played. These are fitted with magnetic devices called pickups in order to electronically increase their volume via a speaker or guitar amplifier.

An acoustic guitar produces its own volume when played and each acoustic guitar sounds different depending on several factors like the body shape, the types of wood that the instrument is made from, the strings and of course the player.

The sound of an electric guitar is primarily derived from the type of electronic devices it’s played through. For instance; several pickup designs sound different, each amplifier has certain controls to alter the sound it produces and that’s not to mention the whole host of electronic effects that the player can add to his equipment in order to produce a different sound.

Technically there’s very little difference in playing either type of guitar. However, because each type lends itself more naturally to certain styles of music; a trend has occurred around the types of music commonly played by each instrument. Acoustic guitars tend to be more chord based and are commonly strummed or finger-picked. Their tone and relatively short sustain lends itself nicely to this application.

Due to their infinite sonic possibilities; electric guitars are put to an exceptionally wide variety of use. Slicker fingerboards and lower string height are characteristics which lend themselves well to melody playing and string bends – producing the type of sounds heard on Chuck Berry or Jimi Hendrix records.

Sometimes it’s confusing when guitars are described as semi-acoustic or electro-acoustic. Because an acoustic guitar produces it’s own sound, there was originally no need for any form of electronic volume enhancement. However, some acoustic guitars are fitted with a facility which enables them to be plugged into an amplifier or PA system. This facility is
called a pickup or piezo and does not change the natural acoustic sound of the instrument. Commonly, these guitars are called electro-acoustic and many players choose to fit this type of facility to their existing acoustic guitars. 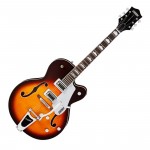 Which should I learn first?

There is no straight-forward answer to this question. Many teachers advise learning the acoustic guitar first because chord knowledge develops a good foundation of guitar playing, learning acoustic first encourages cleaner guitar playing and also helps build up the finger muscles necessary to become an astute player. Once all of these attributes are acquired, the transition to electric guitar becomes far easier than if it were the other way around.