FAQ – What kind of strings should I get?

This question is closely related to ‘how often should I change my strings?’ and that old chestnut will be addressed a little later. First, we’re going to look at the different types of strings to make sure you pick the correct set for your instrument and playing style. 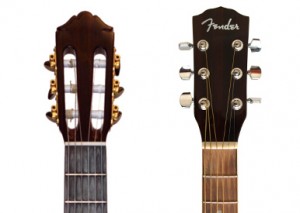 The most common type of strings, steel acoustic strings will suit an acoustic guitar
designed to accommodate these strings. These instruments are generally identified by string posts on the headstock where the steel strings are wound vertically.

Nylon acoustic strings are designed to suit a ‘classical’ type guitar characterised by a wider fingerboard and slots in the headstock around which the strings are wound horizontally. Typically, these guitars will not sport bridge-pins but facilitate through-bridge stringing.

Heavier gauge strings boast more sustain, richer tone, more volume and a larger bass response but also can be less pliable due to greater tension, can sit higher off the fret board and can be harder on the fingers.

Lighter gauge strings are easier to bend as they require less tension to tune them to pitch. They also sit closer to the frets resulting in the player having to apply less downward pressure to achieve a clean sound.

More established players often chose their own string gauge to address tone and feel themselves but lighter gauges are certainly recommended for beginners. However, in some cases very light strings may sit too far down in the nut and drop the strings too close to the fingerboard resulting in ‘fret-buzz.’ Guitars can be adjusted for this but moving back up in gauge is advised. 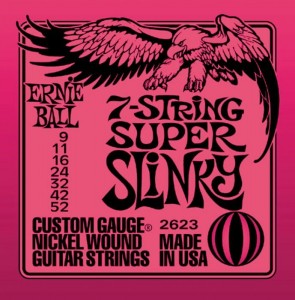 String sets will always have the gauge written on the outside of the packet. Most people use the imperial measurement system and reference the strings from the thinnest one. For instance this pack starts from 0.9 of an inch and works its way up to 0.52 of an inch (thinnest to thickest). In short terms, this packet of strings are called ‘nines’ after the thinnest string. 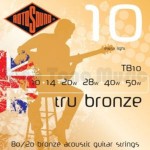 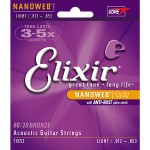 fresher and more vibrant for longer. This is done via a thin plastic coating on the strings to prevent dust and grit embedding between the notches of the wound strings. This residue prevents the string from vibrating and makes it sound dead ore lifeless. Coated strings are extremely efficient and work very well but can cost up to three times as much as regular strings.

There are countless brands of guitar strings on the market, each boasting various material or build superiority over its competitors. The truth is that most un-coated strings are very similar and it would be hard to tell them apart once they’re out of the packet. Experienced guitar players will generally experiment with reputable brands like D’Addario, Rotosound, Ernie Ball or Martin and will pick the ones they feel most comfortable with. Many will find the extra life-span offered by coated strings like Elixir worth the extra cost. 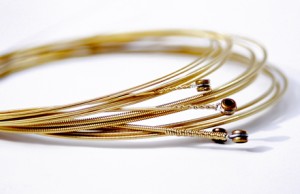 How frequently you should change your strings is simply down to how often you play your guitar. A good reference point is to change them if: (i) they sound dull or lifeless, (ii) they are quite dirty or (iii) you find the guitar hard to tune or it looses tune quicker that usual.